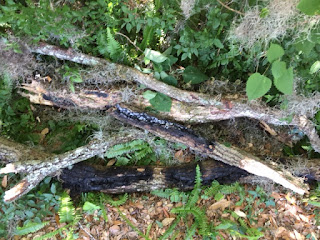 Sunday morning Church began as usual. The Sunday school groups were in session and all seemed to be in routine mode. As the Scriptures were being read, discussed, and as folks were contemplating deep spiritual insights the loudest boom came out of nowhere from behind the Church! Now everyone was certain that canons are illegal to fire within the city limits so the nearest class ran out to investigate.

Upon inspection a few Church members discover a large Oak tree limb had fallen onto a power line immediately behind the sanctuary. When the limb fell it caused a fuse to blow (we don't think it was the transformer?). The electricity and the explosion of the fuse (sorry I'm not an electrician) caused the limb to catch fire. Now understand this is a huge Oak tree that extends onto our neighbors yard and over the Church sanctuary. I joined in and began to pray a hip pocket prayer out loud while a call was made to the fire department.

As the fire slowly began to engulf the limb the Church was also slowly filling up with worshippers. I went inside to greet folks when shortly thereafter I was informed that the fire department had arrived and we were told that they would need to call the power company and for us to expect the power to go out at some point so they could work on the line. Once the service began we made the announcements beginning with information as to what all the excitement was about (not that there usually isn't a great deal of excitement stirring) and for folks not to worry if at some point during the service the power goes out that this would be expected and all will be fine.

The Service began just fine and we made it about a quarter of the way when it happened---the power went out. Now of course this isn't that big of a deal, it was day time so we had enough light coming through the windows to see. It was hot but we have fans in the pews and my sermon only needed about 50 minutes, (just kidding, only 45). I have a loud mouth so I just turned the volume up. The big deal is that I believe this predicament that we found ourselves in was no accident. You see my sermon was prepared earlier that week and the topic--Being connected to the Power of God! What an illustration! Pastors have books on illustrations, we keep journals, etc. etc. in the attempt to connect the Scriptures to our lives. Nothing in my experience compares to showing up at Church and the illustration actually physically coming to life in your presence for you to use.

We were in our second Sunday studying John 15. First we looked at the section on the vine and the branches. Christ is the vine and we the branches. Disciples of Christ are to be connected to Christ where we receive the Spirit, the nourishing sap that flows throughout the vine to produce fruit. We then transitioned into Christ's command to love one another, and we best do this as we remain in His love. I encouraged the Church by pointing out how valuable each one is and that we need Christ and we need one another, and that we must remain connected to Christ. We must remain in His love. We must remain connected to the power source. (this is a quick synopsis, I encourage you to go back and read John 15)

I am happy to report that the fire was quickly extinguished and the power eventually came back on some time after the service ended. Although the electricity went out, the power of God did not. The power of God lives on in each of us as we remain in christ and bear His fruit. This is an illustration that I won't soon forget.

In Christ,
Pastor Brian
Posted by pastor's pen portal at 7:56 PM No comments: